Do you know that earlier times horse racing was one of the lottery games played in most of the countries? Lotteries in Victoria since 1954 have been run by Tattersall’s, the private company owned by the trustees of George Adams who are licensed for up to ten years at a time to promote and conduct a variety of lotteries and any other games approved by the Minister.

Victoria had banned lotteries in the nineteenth century. But for the first half of the twentieth century Victorian residents continued to purchase Tattersall’s tickets from Tasmania. Victoria was by far the largest market for Tattersall’s lotteries.

The Victorian Government of John Cain Snr proposed to legalise a state-run Victorian lottery, similar to that operating in NSW. In 1953 the Tattersall’s Trustees and the Cain government engaged in secret talks  resulted in Tattersall’s moving permanently to Melbourne in 1954.

After slow but steady growth in the 1960s, the 1970’s was a period of expansion for Tattersall’s Victorian and interstate operations.

In 1997, under Victorian legislation (the Tattersall’s Consultations Act 1997), Tattersall’s became the first Australian organisation to sell lottery products on the internet. All players were required to first register with Tattersall’s. Prevailing legislation meant that only players from Victoria, Tasmania, the Northern Territory and the ACT can register and play.

Australian Saturday Lotto is one of the most popular games in Australia and is played across all states and territories. Although the game is widely known as Lotto in most parts of Australia, it is called Tattslotto in Victoria, Tasmania, Capital Territory and the Northern Territory, goes under the name of Gold Lotto in Queensland, and is known as X Lotto in South Australia.
Players need to select a total of eight numbers from a pool of 45. The first six numbers drawn are the main numbers, and the following two numbers are known as supplementary numbers. In addition to the jackpot, there are five secondary prizes in every draw; players can even win a prize for matching a combination of just one main number and both supplementary numbers.

Oz Lotto is Australian big jackpots guaranteeing a minimum division one prize pool of$2 million every Tuesday and can jackpot to $50 million or more. Every Tuesday night, 9 balls are drawn at random from forty five balls numbered 1 to 45. The first seven balls drawn are the “winning numbers” and the last two numbers are the “supplementary numbers”. To win first division you need to match 7 numbers in a single game with the 7 winning numbers from the draw.

The Monday & Wednesday Lotto game has forty-five balls numbered 1 to 45 from which eight are randomly selected. Draws take place on Monday & Wednesday evenings at 8:30 pm and the first six balls are the “winning numbers” and the last two drawn are the “supplementary numbers”. You win if you match the right combination of winning and supplementary numbers with your entry. There are six prize divisions and both weekly draws offer a guaranteed $1 million Division One prize for up to 4 winners. If there are more than 4 winners the $4 million is divided equally amongst all winners.

You can play Super 66 by asking for a Super 66 QuickPick or by marking it on your TattsLotto coupon. You can play 1 to 12 Super 66 games costing just $1.10 per game. You can also add Super 66 to any of your lotto product QuickPick Entries. Just ask your Retailer how many Super 66 Entries you want to add on. When you play, a six-digit number is randomly generated for you compiled from numbers 0 – 9. Six balls are drawn every Saturday night after the TattsLotto draw and the more numbers you match in order the more you win.

The Pools is a ‘6 from ’38 lottery game where the winning numbers are based on results of soccer matches played in Europe, Australia and around the world instead of numbered balls being drawn from a barrel. You can play The Pools simply as a game of chance by playing your favourite or randomly selected numbers, or you can put your soccer knowledge to the test by choosing your numbers based on the teams competing on the Match List for that week. The winning numbers are determined by the order of rank applied to the results of the matches. AS example, score draw games are ranked highest, nil-score draw games are second highest, then away team and home team wins respectively. The Match List numbers for the six highest ranked matches are the “winning numbers” and the seventh highest ranked match is the “supplementary number”. 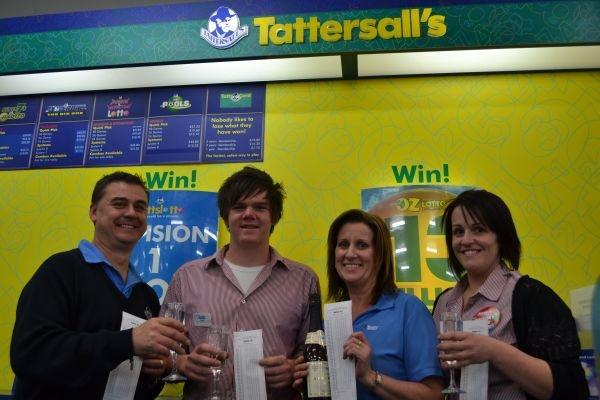