You will find amazing to know that Captain James Cook on his voyage saw a new land and named that piece of land Point Hicks after his Lieutenant, Zachary Hicks. Later Cook in honour for his native England named the land New South Wales on 20th April 1770.
In the same way like Captain James Cook himself, Oz Lotto was the first lottery to make it to New South Wales. It began in 26th February 1994 as Australia’s first fully national game as Saturday Lotto at that time did not include NSW. Oz Lotto holds draws every Tuesday night. To win the big jackpot, match 7 main numbers ranging from 1 to 45. Some secondary prizes require matching a certain amount of main numbers plus one of the two bonus balls picked during the draw. The current Oz Lotto jackpot is AUD$2 million.

How to Play Oz Lotto

Oz Lotto is Australian for BIG jackpots guaranteeing a minimum division one prize pool of$2 million every Tuesday and can jackpot to $50 million or more. Every Tuesday night, 9 balls are drawn at random from forty five balls numbered 1 to 45. The first seven balls drawn are the “winning numbers” and the last two numbers are the “supplementary numbers” To win first division you need to match 7 numbers in a single game with the 7 winning numbers from the draw.

Prizes and the Win 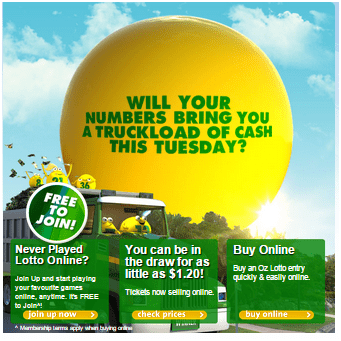 Players can participate in Oz Lotto by purchasing tickets any time before 7:00pm on the night of the draw, every Tuesday at 8:30pm AEST. The most prominent land-based vendor is the Tatts Group newsagency chain (formerly Tattersall’s), but you can also choose to buy tickets over the Web at Oz Lotteries.
In order to win that jackpot prize, players have to match all seven main numbers to the seven on their ticket. This makes the odds of winning around 1 in 45.38 million. However, there are six other prizes that can also be won, which brings the overall odds of winning down to about 1 in 55. Players can win prizes if they match four or more of the main numbers, or by matching some of the main numbers as well as one or both of the two supplementary balls that are drawn. These supplementary are extras which, when matched with any of the seven numbers on your ticket, can help you form lesser winning combinations.
To win each division, you will need to hit the following combinations:

The guaranteed minimum jackpot amount for Oz Lotto is AUD $2 million, but the top prize often rises to a much higher level. In fact, Oz Lotto currently holds the record for awarding the largest ever Division 1 payout in Australian lottery history – nearly $112 million, shared across four tickets back in 2012. That was just one of two Oz Lotto jackpots to exceed AUD $100,000,000.

If you play Oz Lotto through www.OzLotteries.com, you can choose from three different kinds of tickets:

These are exactly what you would expect them to be: single lottery tickets that give you one chance to win. Of course, you can play multiple standard tickets if you want more opportunities to win a prize, but there are easier ways to cover several combinations of numbers at a time. Each individual game costs $1.35 at Oz Lotteries, so a standard sheet of 18 lines will set you back a little over $25.

This kind of ticket allows you to buy all combinations of a certain group of numbers. For instance, if there are nine numbers you would like to play, and you want to cover all possible winning combinations of those numbers, you can play a System 9, which requires 36 tickets in all. System tickets for Oz Lotto start at around $10, while the most expensive – a System 15 – costs over $8,600 and covers a whopping 6435 standard games.

Another way to gain more winning opportunities is to buy into a syndicate. These groups allow you to buy a share of a larger number of Oz Lotto games without covering the entire cost of the tickets yourself. In this way you will increase your chances to win major prizes by buying into the bigger systems, although you will also be sharing any wins with the other members of the syndicate. 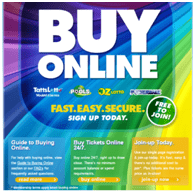 The easiest way to buy tickets for the Oz Lotto jackpot is to go online at Oz Lotteries – Australian Gambling‘s number one Internet lotto destination. It covers all the major Aussie lottery draws, including Saturday Lotto, Powerball, Lotto Strike, and The Pools.
You can even buy mobile Oz Lotto tickets on Apple iOS, Google Android, and BlackBerry devices, as well as most other smartphone and tablet formats.